Many people usually drink alcohol as a pleasant way to relax. However, other people tend to drink too much or non-stop, endangering their own lives and other people, which can be problematic. When someone starts drinking too much alcohol, they may find it hard to feel good without it and get stressed frequently. They may also find it difficult to make decisions. This behavior is one of the warning signs of an alcohol use problem.

Are You Taking Too Much Alcohol?

When a person is drinking excessively, it means they are binge-drinking or drinking heavily regularly. Binge-drinking typically involves taking several drinks a night or during the day. Binge-drinking for men occurs when they take more than five drinks in a sitting, while it includes taking four drinks or more on one occasion for women.

Heavy drinking is classified by how many alcoholic drinks one takes weekly. For men, it includes 15 or more, while it includes eight or more for women. Each person is affected differently when they take alcohol, so how can you tell if you drink too much?

A drinking problem usually develops gradually, and it can take hold of you before you know it. Signs to tell you that you are drinking too much include the following:

Alcohol dependence or alcoholism is a serious disease with four main symptoms:

So, if you are exhibiting any of these symptoms, you may be suffering from alcohol addiction, alcoholism, or Alcohol Use Disorder (AUD)

Other indications of alcohol use disorder include the following: 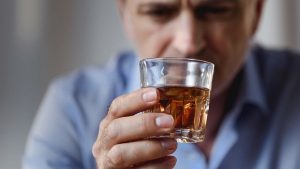 Alcoholism or alcohol addiction is a medical diagnosis for people suffering from a severe drinking problem. The disorder is a recurring disease of the brain distinguished by a negative emotional state when sober, a loss of control over one’s drinking, and compulsive alcohol use.

To diagnose someone with an alcohol use disorder or alcohol addiction, you need to watch out for the signs mentioned above. However, if you need further confirmation, you can also ask yourself the following questions about their drinking habits:

If the answer to any of these questions was yes, then you will need alcoholism treatment as soon as possible. Regardless of the severity of your drinking problem, you can always benefit from treatment.